Legion Solar™ is a unique solar system where the cost is as low as $1.23/watt (after tax incentives) compared to traditional system that are upwards of $4.50/watt. Our simple do-it-yourself solar + battery storage + off grid power system. Installs in minutes, delivers instant results, pays for itself 3x faster than traditional systems.

We took all the short comings of traditional solar systems and designed a game changing new solution to outperform. 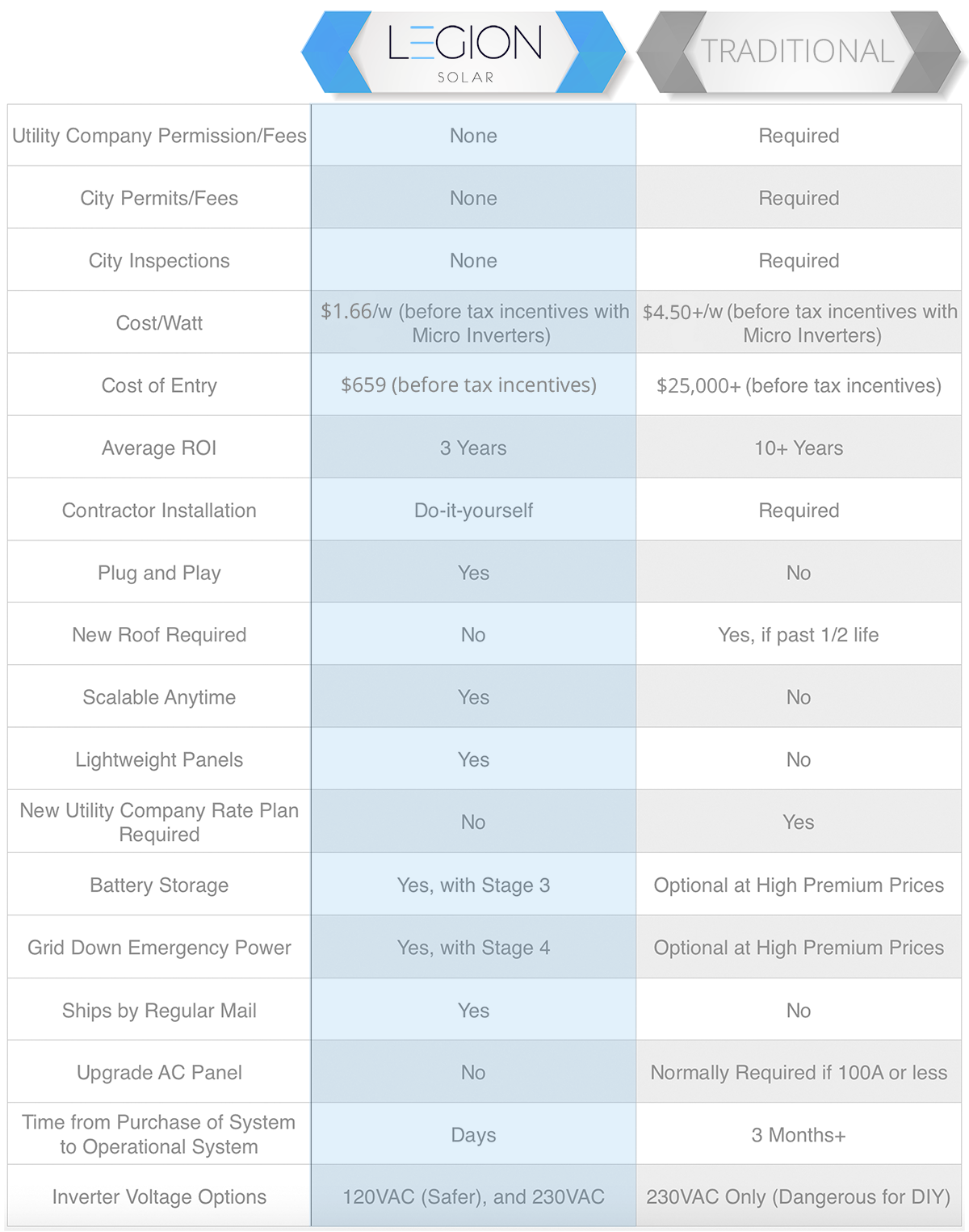 We created SolarRegulator™, a technology to enable you to contain generated energy behind your meter where the utility company does not own allowing you to generate your own electricity unrestricted. Legion Solar works with your existing rate program to simply drive consumption down. Utility company only sees less consumption from you, not a grid tied solar system. As a result, it is not necessary to seek interconnection permission pertaining to utility company approved grid-tied solar systems.

Scale your System Anytime in Stages

With Legion Solar, you don't have to commit to large expensive systems up front. You can start as small as 300W and expand your system in stages depending on your budget and needs.

Stage 1 - Get familiar with Legion Solar and it's components with the Starter Set. Sets up in minutes and experience instant results. A 300W Starter Set is enough to make a noticeable impact to your electric bill.

Stage 2 - Scale your solar output with expansion sets to offset your daytime usage. 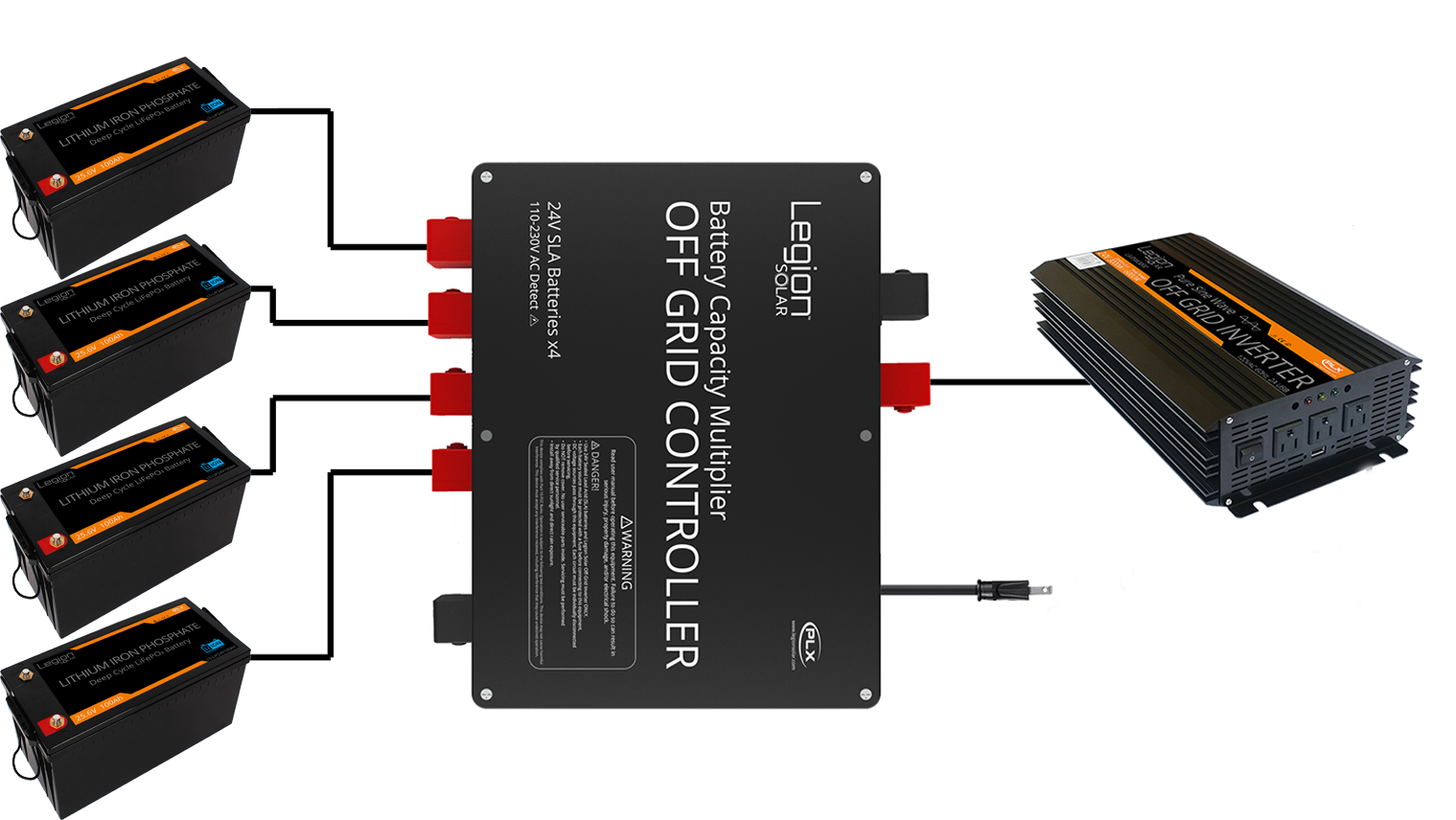 Avoid the higher tiered pricing and eliminate having to pay unfair prices per kW utility companies charge for exceeding consumption limits. With Legion Solar, you'll not only save by consuming less energy, you'll also pay less per kW.

Traditional solar system have built-in costs such as resellers markups, installation labor, permits, inspections, sales rep overhead, and many other fees. Legion Solar is energy delivered straight to your door without the unnecessary costs giving you up to 3x faster ROI.

We use only the best PV cells for maximum efficiency, and excellent low light performance. Legion Solar photovoltaic panels are designed specifically for the Legion Solar Micro-Inverter to achieve an ideal system match for high efficiency DC to AC conversion. Our panels are built to handle hurricane force winds, hail, and snow.

Micro-inverters outperform that of traditional central inverters due to no single point of failure. Each inverter cell works independently of each other to maximize energy production in partial cloud or shady conditions.

Safety features are also included called anti-islanding. A feature to immediately shut down solar power production from back feeding to the grid to protect line workers during power outages.

SolarRegulator’s bluetooth interface allows you to monitor your energy production and consumption, check system health, and more via the LegionSolar App for Apple/Android.

Battery Commander connects in between the micro inverter and the solar panel. During daylight solar energy is used to supplement usage from your utility company and charge the batteries. At night, batteries supplement your usage enabling Legion Solar to completely offset all of your daytime and nighttime consumption.

Off Grid Inverter is used to supply grid compatible AC power from 24V batteries for use with appliances rated up to 3000 Watts. Have peace of mind for you and your family in any emergency.